Sacred America, Sacred World: A New Blueprint for the Evolution of Humanity with Stephen Dinan

As the 2016 election approaches, America is spiraling into a dysfunction that threatens us all, including our allies around the world. The two-party system, sprung from the aims of democracy, has become violently divisive, almost to the point where there are two Americas, each at the other’s throat. America is being pulled apart, and every citizen feels the pain from this profoundly. When did political discourse become a boxing match? How did America, founded on the highest of principles of justice and freedom, get so far off course? And, most importantly, is it too late to repair the damage and get back on track?

In this episode, political strategist, social innovator, entrepreneur, and founder and CEO of The Shift Network, Stephen Dinan, joins Sandie to discuss why the evolution to a truly sacred America is not an idealistic, ungrounded dream; it’s an evolutionary imperative.

STEPHEN DINAN was a senior staffer at the institute of noetic sciences (ions), where he was the driving force behind the Shift in Action program. He also directed and helped create the Esalen Institute’s Center for Theory and Research—a think tank for scholars, researchers, and teachers to explore human potential frontiers.

He is a member of the prestigious Transformational Leadership Council and Evolutionary Leaders Groups, and the author of two books—Radical Spirit: Spiritual Writings From the Voices of Tomorrow and Sacred America, Sacred World: Fulfilling Our Mission in Service to All.
Website: www.theshiftnetwork.com

Posted by Sandie Sedgbeer at 2:23 PM No comments:

Dear Human – A Love Letter To Humanity with Courtney Walsh

A few years ago, writer Courtney A. Walsh posted a meme on Facebook… The first words were “Dear Human.” It went viral and has been seen more than 20 million times. It’s been called a love letter, a manifesto, a poem, a battle cry, and it has literally been shared and commented on by millions of people around the world. Shared by Elizabeth Gilbert, tweeted by a Khloe Kardashian, read in yoga classes, pinned in cubicles across the globe, used in wedding vows, discussed in radio interviews, featured on blogs, and translated into several different languages.

In this episode, Courtney A Walsh joins Sandie to discuss her refreshingly candid, hilarious and insightful follow-up book Dear Human, A Manifesto of Love, Invitation and Invocation to Humanity, in which she blows up old programs and conditioned ways of thinking and asks us to embrace our glorious messiness, to love to the best of our ability, to continue to learn and grow, to be willing to show up AND get out of the way.

COURTNEY A WALSH is a social media rockstar and metaphysical humor author, internationally renowned speaker and writer of the “Dear Human” viral media meme that has now been shared with over 20 million people including on Deepak Chopra’s website and Elizabeth Gilbert’s pages as well as retweeted by Khloe Kardashian and radio personality Delilah. http://www.courtneyawalsh.com

http://omtimes.com/iom/2016/06/dear-human-love-letter-humanity/
SaveSave
Posted by Sandie Sedgbeer at 11:59 AM No comments:

The Secret to Living a Passionate Life with Janet Bray Attwood

What does it mean to live a passionate life? Exciting, fulfilling, thrilling, on fire, purposeful, turned on, motivated, entertaining, easy, fun, unstoppable. It’s a life aligned with destiny.

We all know we’d like to feel our life is purposeful. We all want to be passionate about what we’re doing, to be excited about how we spend our days, to love our life and to feel we’re making some valuable contribution. But how do we create all this if we don’t know what our real passion is?

In this episode best selling author of “The Passion Test,” written with her former husband, best friend and business partner Chris Attwood, Janet Bray Attwood joins Sandie to share the secrets that have helped hundreds of thousands of people around the world live a passionate life. 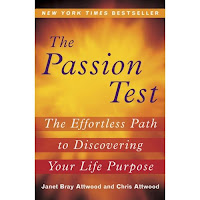 In addition to presenting her programs on the same stage with The Dalai Lama, Sir Richard Branson, Stephen Covey, Jack Canfield, Lisa Nichols, and many others, Janet has personally trained over one thousand Passion Test Facilitators worldwide.

Janet has been practicing the Transcendental Meditation® program for more than thirty-five years and is a facilitator of the Work of Byron Katie.