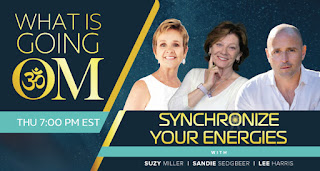 Do you feel you’re just surviving these transitional times, or are you thriving within them?  We are traveling so rapidly through an era of unique and tumultuous spiritual revolution, it’s not surprising that many feel as though they’re being swept along on an unanchored wave of change. This new monthly show with Sandie, Suzy, and Lee will help stabilize this process for you by providing clear insights into these transitions and a stable means of moving through them.  This information, paired with the opportunity to synchronize your energy fields to flow with this rapid rate of change, will help you to thrive and not just survive.

Broadcast live at 4 pm PT/7 pm ET on the last Thursday of every month, Synchronize Your Energies with Sandie, Suzy and Lee is an exciting new monthly show that will track and interpret the rapid evolutionary shifts in consciousness that are upgrading us all.  Every month Sandie, Suzy, and Lee will share in a relaxed, round-table conversational format, their individual insights and intuitive interpretations of what’s currently unfolding in the seen and unseen worlds around us, topped off with a unique and very powerful energy synchronizing experience facilitated by Suzy Miller.

SANDIE SEDGBEER is a professional journalist who cut her teeth in the ultra-competitive world of British newspapers and magazines. A veteran Talk TV/Radio broadcaster, author, and media consultant, and host of OMTimes’ Magazine’s weekly flagship radio show, Sandie has interviewed some of the world’s leading thinkers, scientists, authors, educators, and spiritual teachers.

LEE HARRISis an energy teacher, intuitive, channeler, artist, and musician. He began as a part-time healer in 2004, doing intuitive readings out of his home in England. His work currently reaches hundreds of thousands around the planet, through his videos, audio recordings, writings, workshops, and online events.

Now based in California, Lee manages an international team of creatives in his self-growth company Lee Harris Energy; a worldwide multi-media and event production house. Lee and his team are passionate about grounding creative spirituality into these challenging times. As a transformation guide and teacher for others, he is determined to see people experience impactful and abundant lives while supporting each other through community.
https://www.leeharrisenergy.com/

A visionary speaker, author, telepathic communicator, and multidimensional seer, SUZY MILLERis the founder of the groundbreaking Awesomism Practitioner Process and The Journey Back to Love Series.  While exploring the field of leading-edge consciousness, she has personally undertaken intense physical, emotional, mental, and spiritual inquiries which have grounded her work in a practical, accessible way.

Suzy has collaborated with professionals in a variety of fields from psychology, social work, mainstream education and medicine to leading-edge scientists, metaphysicians, healers and new thought leaders. She collaborated twice with Dr. William Tiller, Professor Emeritus Stanford University and featured physicist in the movie “What the Bleep Do We Know?” spearheading both The Autism Intention Healing Experiment as well as an experiment for the elevation of collective human consciousness. www.suzymiller.com

Join us live tonight by clicking the link below:
https://bit.ly/2SuJIhP

Posted by Sandie Sedgbeer at 12:04 PM No comments:


What caused Albert Einstein to recognize the general theory of relativity
laying in his bathtub? What caused Steve Jobs to re-imagine the
personal computer, and the phone, and then to imagine a tablet that
didn't even exist until everyone realized they had to have one? Why do some people have ideas that change the world while others live lives of quiet imitation? What are the components that contribute to an original, creative, and brilliant life?

After studying the subject and speaking to 420 extraordinarily intelligent people for his latest book, Radical Brilliance, Arjuna Ardagh knows the secrets.  What’s more, he claims, anyone with the right understanding and willingness to make shifts in their lifestyle can not only create the optimal environment for innovative originality to thrive.

If you’re looking for ways to increase your creativity, bring more brilliance into your life, and make a contribution to the evolution of human consciousness, join Sandie this week when guest Arjuna Ardagh will be sharing the secrets of the “Brilliance Cycle,” which shows us that when four very different styles of activity repeat in a cyclical fashion in the same life, brilliance is the result.

ARJUNA ARDAGH is a bestselling writer, public speaker and executive coach, who has trained more than 2000 coaches over the last 25 years. He is the author
of nine books, including the 2005 #1 National Bestseller The Translucent
Revolution. His latest book, Radical Brilliance, is the anatomy of how and why
people have original ideas which change the world. He has been a speaker at
conferences all over the world, including at Google and the United Nations. www.radicalbrilliance.com

Join us live tonight 4pm PT/7pm ET Click the link below and start the player
http://omtimes.com/iom/2019/02/radical-brilliance-with-arjuna-ardagh/
Posted by Sandie Sedgbeer at 11:50 AM No comments: 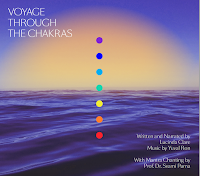 In this week’s show award-winning composer and peace activist Yuval Ron and pioneering integrative health practitioner, Dr. Richard Gold, join me Sandie to discuss music as medicine for both the soul and the body. We will be playing clips from their latest double album, Voyaging Through the Chakras, which features a series of transformative guided meditations from Lucinda Clare, sublime music by Yuval Ron, performed by world-renowned musicians, embedded subliminal affirmations by Dr. Richard Gold that will to entrain your brain to its natural state of peace, and mantras whispered by the Himalayan Master, Svami Purna, designed to guide the soul toward illumination.

In between, we’ll be discussing:
·     How music changes the structure of the brain and impacts the body
·     Sound Cymatics – the wave-like patterns that we see in nature, art, and stone and crop circles around the world.
·     The therapeutic benefits of sound waves
·     The latest research on gene modification with ultrasound… And more… 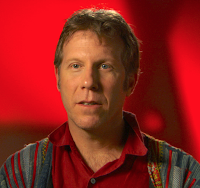 YUVAL RON is a world-renowned musician, composer, producer educator, and peace activist who has composed music for the Oscar-winning film, West Bank Story, has performed for the Dalai Lama and has collaborated with Sufi leaders, Zen buddhist priests, visual artists, choreographers, and neuroscientists. A noted lecturer, he has spoken at Yale, John Hopkins, MIT, and has been on the faculty of the Esalen Institute. His book Divine Attunement: Music as a Path to Wisdom, won the gold medal award for best spirituality book at the indie book awards 2015.

DR. RICHARD GOLD is alicensed acupuncturist, and holds a doctorate in Psychology.  One of the founders of the Pacific College of Oriental Medicine, he has spent the last four decades pursuing mental mindfulness and meditative awareness, and, in more recent years, studying neuroscience and the evolving understanding of the effects of sound and meditation on the brain. His best-known book is Thai Massage: A Traditional Medical Technique.


Posted by Sandie Sedgbeer at 11:13 AM No comments: